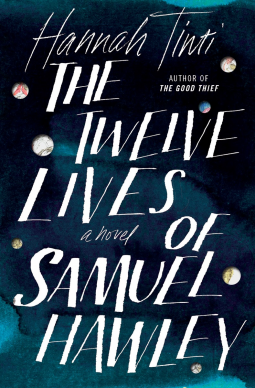 Thank You to Random House Publishing Group for providing me with an advanced copy of Hannah Tinti’s novel, The Twelve Lives of Samuel Hawley, in exchange for an honest review.

PLOT – Samuel Hawley is an outlaw, who has spent many years moving across the United States with his daughter, Loo. Now that Loo is a teenager, Samuel feels that he can make an honest living as a fisherman, and he settles in the same New England town as Loo’s maternal grandmother, Mabel. Loo’s mother, Lily, died in a lake accident when Loo was an infant, and Mabel believes that Samuel had hand in her daughter’s death. Was Samuel responsible? Can a man who has committed so many crimes, really be safe from his past coming back to haunt him?

LIKE– Tinti is the co-founder of One Story, one of my favorite monthly magazines ( check it out, it’s awesome), and I had the pleasure of taking an online writing class with her last month. It was fabulous!

Tinti has an interesting way of framing The Twelve Lives of Samuel Hawley. She has given Samuel a body riddled with scars from bullets wounds, and she alternates chapters between the present and the past, using the past chapters to explain the ways in which Samuel has been shot. In the past, we learn about Samuel’s life of crime, his associates, and how he met Lily. As the story unfolds, we learn the truth about Lily’s death, and how it impacts the trajectory of the story. In the present, we see Loo growing into a teenager and trying to figure out details about her mother, through both her grandmother and living in her mother’s hometown. This structure created a solid framework for pacing the mysteries of the novel and keeping the suspense.

In addition to a strong structure, The Twelve Lives of Samuel Hawley, has memorable characters. I was most intrigued by Lily and her relationship with Samuel. The chapter in which they meet, was the most intense, gripping chapter of the novel. It was cinematic. Speaking of cinematic, Tinti writes in a grand way, with beautiful imagery and sweeping landscapes. For example, there is a dramatic scene on a glacier in Alaska. Having recently visited a glacier in Alaska, I can tell you, that Tinti captured that amazing environment, including the details of the sounds a glacier makes, which is what was most memorable for me.

DISLIKE– There were a few places where I felt my suspension of disbelief was tested; for example, there are two separate scenes with a whale that didn’t work for me. It seemed too outrageous for the tone of the story.

Although I love idea of this outlaw who can survive whatever comes his way, it became a little much to have so many bullet wounds that were patched up. In one chapter he shoots his own foot by accident, which leads to a memorable experience taking a young Loo trick-or-treating, but otherwise, doesn’t seem to advance the story.

RECOMMEND– Yes. Tinti is an imaginative writer that takes readers to unexpected places.  I was able to empathize and connect with all of her main characters. If you can let a few things slide, The Twelve Lives of Samuel Hawley is worthy read. It’s suspenseful and engaging.

One thought on “The Twelve Lives of Samuel Hawley”