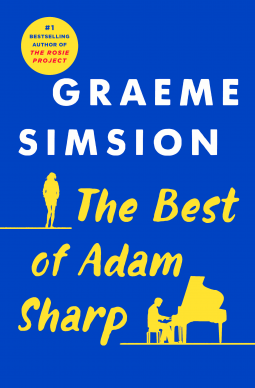 Thank You to St. Martin’s Press for providing me with an advanced copy of Graeme Simsion’s novel, The Best of Adam Sharp, in exchange for an honest review.

PLOT- Twenty years ago, while working in Australia, Adam Sharp met Angelina Brown, a vivacious soap-opera actress. Adam and Angelina had a short and intense relationship, which ended when Adam’s work took him to New Zealand.

Now, over twenty-years later, Adam is living in England and his marriage is on the rocks. His wife, Claire, has a major career opportunity that might require her to relocate to the United States, and Adam isn’t sure he should follow. In the midst of his marital crisis, Adam receives an email from Angelina, whom he had lost touch with years ago. Although Angelina is married with three children, she begins a flirtatious email exchange that plunges Adam down the rabbit hole of nostalgia. Angelina invites Adam to spend a weekend with her and her husband, Charles. This weekend seems like a bad idea, a very bad idea: but can Adam resist his past?

LIKE- I’ve read Simsion’s The Rosie Project and The Rosie Effect, and I’m a fan of his writing. He’s fabulous at creating memorable characters. The Best of Adam Sharp is a character drive novel. It is a riveting emotional drama, one where the stakes are enormous and it feels like everyone is bound to lose.

Nostalgia is at the heart of The Best of Adam Sharp. Adam and Angelina meet prior to the internet being a big deal and when they part, they don’t have an easy form of communication. It’s a contrast to todays technology and social media, where it is easy to keep in contact with people from your past. Prior to Angelina reconnecting, Adam only has his memories of her. He has a hobby as musician and he links songs to memories. He met Angelina while playing the piano and singing at a bar: Angelina joining him on stage. They connect through music and the  lyrics become a form of secret communication that takes on a huge importance. I think most readers will be able to relate to this form of nostalgia, where we look at the past with rose-colored glasses and where we put certain moments on a pedestal ( good or bad memories), allowing particular fragments to take on a deeper meaning. The further the distance, sometimes leads to less perspective.

The first half of the novel is about the nostalgia and the romance, but the second half takes a rather dark turn, when Adam decides to stay at the country house in France with Angelina and Charles. Angelina and Charles do not have a happy marriage and they have brought Adam into their troubles. The moral of the story being, while it is possible to reconnect with your past, be careful that the boundaries are clear, and that your past, doesn’t endanger your present or future.

DISLIKE– The second half of the book left me feeling funny about both Adam and Angelina. Character likability is certainly not a requirement for me to enjoy a novel, however it helps. I liked both Angelina and Adam, when they were nostalgic for their past, but when they crossed the line into a bizarre and rather uncomfortable scenario with Angelina’s husband, I was left with a bad taste for both of them. I wasn’t sure what to think about Charles. It’s realistic that under the circumstances he would be a little hostile or conflicted, but it was hard to respect his character, even in the end. The story included a bit of erotica, which was surprising. I’m not prudish, but under the circumstances of the novel, it was highly uncomfortable to read. I guess what I’m saying is that I felt “squirmy” while reading the second half, which is what I think Simsion set out to do.

RECOMMEND– Yes. Simsion is a wonderful storyteller, who writes about complex emotions and relationships. The Best of Adam Sharp made a deep impression on me.