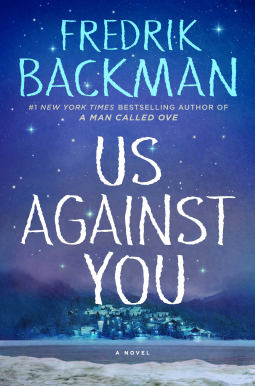 Thank you to Atria Booksfor providing me with a copy of Fredrik Backman’s latest novel, Us Against You, in exchange for an honest review.

PLOT– Fredrik Backman returns to his hockey obsessed Swedish town in Us Against You, the sequel to his 2017 novel, Beartown. Beartown is still experiencing the fallout of a scandal that pitted neighbor against neighbor: the rape of Maya, the daughter of the general manager of the Beartown Hockey Club, who accused the star player, Kevin, of attacking her. The town had divided loyalties, which only aided their biggest rival, the town of Hed, when some of the Beartown players defected to the enemy.

Months have passed and it is summer. Kevin’s family decided that it was best to leave town and although Maya will not longer have to see her rapist, she still feels hatred from those who supported him. Her father, Peter, is on the brink of having his hockey club shut down and is struggling to find a way to keep it going. He is approached by a business man with a proposition, yet the solution may come at the expense of the town residents.

LIKE– I love Fredrik Backman’s novels. He creates characters that have a way of invading your soul; characters that are not only memorable, but ones who become part of your world. I was very eager to go back to Beartown. I have to qualify this though, Beartown is not a happy place. It’s an economically depressed town in rural Sweden. Terrible and cruel things happen in Beartown. It is not a place that you’d want to visit on a vacation to Sweden! The characters are all rough around the edges and have a heavy distrust towards outsiders. They would not welcome you to Beartown. That said, they are also people who love fiercely and are protective towards their own. Beartown has a strong sense of community that is enviable. These are people who not only know their place in the world, but actively own it and are proud of it.

Us Against You is even better than Beartown. I think it has to do with the story. Beartownis more straight-forward, where asUs Against Youis all about the fall-out from the rape and people having to face how they initially reacted. It’s complicated. People do not like to be confronted with their mistakes. Change is hard, change is complicated. Us Against Youhas a large cast of characters and each is written with complexity.

I feel that Backman’s story is timely with regards to the current policy climate, both in America and around the world. It’s not a political story per-se , but it is a story about human emotions and about working with different view points or more than that, the idea that people value things at different levels. It seems simple that people would agree that Kevin should be punished for raping Maya, but it’s not simple. Beyond the idea that some people think Maya has lied, some characters feel that things like having a winning hockey team are more important than Maya’s pain. It’s not really the hockey though. For example, some of the parents of other kids on the team, kids that may not be as talented as Kevin, but who have worked hard for many years, will lose their opportunity to be on a winning team if Kevin isn’t allowed to play. They don’t see it as simple as a Kevin/Maya issue, now that their child is affected. Right or wrong, their value is on their own child, over Maya or Kevin. As in real life, Backman’s characters are complicated because they value different things at different levels, which can lead to not only misunderstandings, but an “Us Against You” attitude. Communication is impossible when people build up their walls.

I’ve been to a hockey game, but I can’t claim to know much about the sport. Us Against Youis a story about the people of the town, but it also has a lot about the game of hockey. It’s a testament to Backman’s writing skills that he can keep a non-hockey fan engaged in the parts of the story that involved the hockey games and practice. I felt energy in his writing that made me excited about the sport.

DISLIKE– My only negative is occasional bouts of sluggish pacing.

RECOMMEND– Yes! If you’ve not already read Beartown, read it first. Us Against Youis a must read for Beartownand Backman fans!