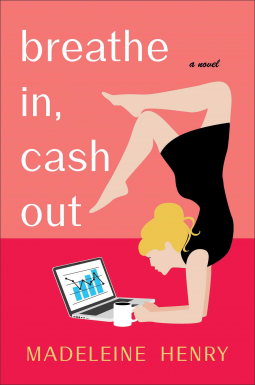 Thank you to Atria Books for providing me with a copy of Madeleine Henry’s novel, Breathe In, Cash Out, in exchange for an honest review.

Recent Princeton grad, Allegra Cobb has landed a job as an analyst at the prestigious New York City investment firm, Anderson Shaw. She is on the fast track to success, yet her life feels empty. Her true passion is yoga and if she can just endure her insane work schedule until her annual bonus, she plans to quit banking and follow her dreams. However, staying sane while pulling all-nighters becomes more difficult when she meets Skylar. Skylar is a beautiful and magnetic yoga instructor with an popular social media following. Skylar brings Allegra into her circle, trying to convince her to leave her job early. In the beginning, Allegra is enchanted by Skylar, but she soon realizes that Skylar is not what she seems.

The themes of Breathe In, Cash Out will strike a chord with most readers. Like Allegra, a majority of the people I know, including myself, have put dreams on the back burner to pursue money or a more “sensible” career. Allegra was raised by a single father, who also pushed her to chase the dream of working in banking. Allegra is an overachiever, but the goal of getting an Ivy League education and working for this specific firm, was in big part because of her father’s pressure. It is a pressure not just to succeed, but to succeed in a specific way. Although my mom was nothing like Allegra’s father, I could definitely relate to Allegra’s desire to please her father and not disappoint. It’s a winning moment when Allegra decides that she must follow her own life path, even if it means disappointing her father or giving up what society would consider to be a dream job. We have one life and we must live it on our terms.

Breathe In, Cash Out also plays with the theme of trust. Allegra exists in a cut-throat world and trust is difficult. Allegra learns hard lessons when she puts trust in people who are only looking out for themselves and she devalues those around her who have her back. I liked the relationship between Allegra and her co-worker, Tripp. True to his frat-boy sounding name, Tripp seems like the last person that Allegra should trust. He’s charming and never seems to take life seriously. However, appearances can be deceptive. On the theme of appearances being deceptive, Breathe In, Cash Out explores the idea of being social media famous and how that does not necessarily equate joy or success. When we live in a culture that puts a heavy emphasis on perception, it is easy to lose perspective.

Based on the themes and premise, I was very excited to read Breathe In, Cash Out, but my expectations fell short. It was akin to having trouble starting a car. I would begin to invest in a storyline and then the pacing would stall.

For example, the story opens with Allegra having a one-night stand with someone who she later learns is her superior at work. This should have set up a ton of conflict and tension, but it doesn’t. She quickly realizes that he is married and that he is treating the whole evening with her, as if it never happened. He is not a nice person or a good boss. Fairly quickly, Allegra realizes what is happening and to her, it is written off as a mistake. The potentially explosive scenario fizzles.

Skylar, who turns out to be the primary antagonist, is another example. There is a truly creepy situation with Skylar at the end of the novel, which I anticipated would lead to an even bigger scene or revelation. However, it is a false alarm. The storyline ends abruptly, which is unfortunate, as it was the most memorable scene in the story. It gave me the chills.

Breathe In, Cash Out was far too involved in the world of Allegra’s job with loads of technical terms and presentations, but skimpy on the character development. I could relate to Allegra’s conflict and passions, but I could not relate to her.

Henry had a great story idea, but Breathe In, Cash Out missed the mark. I cannot recommend it. 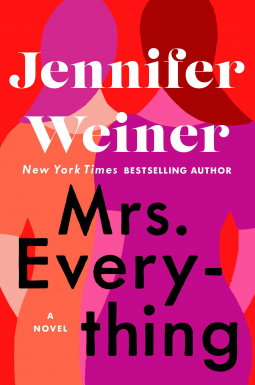 Thank you to Atria Books for providing me with a copy of Jennifer Weiner’s latest novel, Mrs. Every-Thing, in exchange for an honest review.

In Mrs. Everything, bestselling author Jennifer Weiner explores the lives of the Kaufman sisters, Jo and Bethie. Although they are very different women, the Kaufman sisters are close, until Bethie is raped. The guilt, miscommunication, and things that go unspoken drives a wedge between the sisters and they spend most of their lives struggling to repair their relationship.

Mrs. Every-Thing is an epic story that begins in the 1950’s and spans decades, following Bethie and Jo through their childhood to their golden years. Weiner tackles many of the heavy themes of those decades, including feminism, civil rights, and gays rights. Her characters are in the thick of it.

Jo seems to follow a more traditional path, marrying young and becoming a mother. She lives in the suburbs of Connecticut and outwardly reflects the attitudes of a conservative housewife. However, she is hiding a relationship that she had with a female classmate in college, a love that has never died. She carries the burden of not feeling that she can live her authentic-self, as she tries to maintain a happy home for her children, while her marriage is crumbling.

Bethie takes a different path. After being sexually assaulted, she turns to an alternative, hippie lifestyle of the 60’s and lives on a commune. She is wary of marrying or having kids, but is vocal in her passion to promote feminism. She eventually realizes that she has a desire to be an entrepreneur, which is in conflict with the ideals of the commune, so she leaves and becomes a successful businesswoman. She also finds love with an black man in an time not long after the civil rights era.

Admittedly, in the hands of a different writer, the topics covered in Mrs. Every-Thing, may have come across as cliche. However, Weiner is a masterful storyteller and she has created two compelling protagonists. The tale of the Kaufman sisters is a page turner and I was engaged for the entire ride. It made me consider my own life path as a child of the late 70’s and how different my options have been from those of my mom and aunt, who were both born just a decade prior to Jo and Bethie. We often judge the world and the people living in it from the standards of now, however people are very much a product of the era in which they were raised. Our world is constantly changing and every generation has unique challenges. Through hindsight, I can now see just in my lifetime how far we have come with regard to inclusion and rights, yet how far we need to go. The story of the Kaufman sisters is look at a few pivotal decades in American history and moreover, what it meant to be female during that time.

I highly recommend Mrs. Every-Thing and Weiner’s other novels. She’s a talented writer!