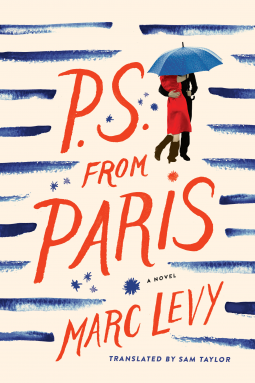 Thank you to AmazonCrossing for providing me with an advance copy of Marc Levy’s latest novel, P.S. From Paris, in exchange for an honest review.

PLOT – Mia is a British actress whose latest film is about to be released. Her husband, who also happens to be her co-star, has been caught cheating and Mia runs away to Paris to stay with her friend Daisy; a chef and restaurant owner. In efforts to keep a low profile, Mia changes her hairstyle and helps out as a server in Daisy’s restaurant.

Paul is an American fiction writer living in Paris. His novels have inexplicably seen a great success in South Korea. Paul has a relationship with his Korean translator and although he loves her, she has grown distant. Paul has a fear of traveling and only sees her for a few weeks a year, when she comes to work on his novels in Paris.

Paul and Mia meet through an internet dating site. Mia has taken on Daisy’s identity and Paul is unaware that she is a famous actress. Paul’s life becomes very complicated when the reason for his success in South Korea is revealed. Are Paul and Mia a good match or will their messy lives be their undoing?

LIKE– This is my first encounter with Levy’s writing, although I’ve since learned that he is a extremely successful and prolific French novelist. This is great news, because I throughly enjoyed P.S. From Paris.

P.S. From Paris is dialogue heavy and felt very cinematic. It was effortless to see this novel being turned into a film or perhaps even a stage play. The dialogue is sharp, witty, and affecting. Levy has a gift for achieving maximum emotional impact with zero extraneous words.

There is a sweetness to the relationship between Mia and Paul, which never dips into being overly sentimental or saccharine. I loved both characters and was wholly invested in them as both individuals and as a couple. My feelings towards them, are similar to ones I have with the great romantic comedy pairing of Meg Ryan and Tom Hanks in both Sleepless in Seattle and You’ve Got Mail. I simply adored the characters. I had a smile on my face as I was reading.

I loved the twist with Paul’s success in South Korea. It was such a surprise.

DISLIKE– I wondered why Daisy put up with so much of Mia’s rude behavior? Mia is quite terrible to her friend. I guess the answer is that they have such a close relationship that it is able to weather Mia’s self-centered antics. However, this still doesn’t sit well. I wish this component of the story had been smoothed out more. I loved what Mia was around Paul, but disliked her when she was interacting with Daisy.

RECOMMEND- Yes. P.S. From Paris is an engaging and lovely story. It’s a feel good novel. I can’t wait to read more stories by Levy. I’m thrilled to have discovered him.