Thank you to Pushkin Press for providing me with a copy of Mieko Kawakami’s novella, Ms. Ice Sandwich, in exchange for an honest review.

PLOT – A young boy going through puberty develops a crush on a quirky woman who sells ice sandwiches at a local grocery store.

LIKE/DISLIKE– Ms. Ice Sandwich is part of Pushkin Press’ series highlighting Japanese authors. I love reading writers from other countries, but I have to admit that I felt like a lot of this novella was lost in translation. Actually, I’m left unsure whether or not it was lost in translation or just not a complete story. Or perhaps, it was brilliant writing, because it kept me thinking about it long after I put it down.

The most intriguing aspect was the character, Ms. Ice Sandwich. She is a very unusual woman, who wears thick blue eye-shadow and is mocked by many people in the town. The protagonist, is fascinated by her and goes out of his way to visit her sandwich stall. I’m not sure that I quite understand what an ice sandwich is, but I think it was more of a Japanese treat, than a savory or meal item. She, being an adult, has no idea that this kid has a crush on her. Knowing that she is older and the town-weirdo, he keeps his obsession fairly hidden, only spilling partial truths to his friend, a girl he has nicknamed Tutti-Fruiti. I wasn’t sure how this crush was going to play out. I kept thinking with the way that the town treats Ms. Ice Sandwich, that she may have been transgendered, but this never came about in the story. It seems her treatment is solely because she dresses quirky and wears too much make-up. This wasn’t a strong character or story choice. I was let-down when my anticipation of a greater reveal, never came to fruition.

Kawakami captures a young boy’s first crush very well, with plenty of realism. He goes through so many emotions as he is trying to process this new feeling. He also has awkwardness with his peers and is dealing with caring for his sick grandmother.

The end of Ms. Ice Sandwich was a let-down, with a dull resolution with regard to both the crush and Ms. Ice Sandwich’s future. I was wanting a more dramatic or unexpected resolution, but the story just ended on a dull note. It fizzled.

RECOMMEND– Maybe. If you can read Ms. Ice Sandwich in Japanese, I think you might have a better experience. Overall, I enjoyed the story, but I don’t think it will be memorable when I look back over my favorite books that I read in 2018. 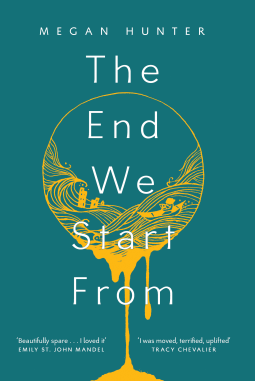 Thank you to Grove Atlantic for providing me with a copy of Megan Hunter’s novel, The End We Start From, in exchange for an honest review.

PLOT – In the not-too-distance future, a major flood has destroyed London and the unnamed narrator must try to survive with her newborn baby.

LIKE- The End We Start From is a survival story at a break-neck pace. Although due to family visiting, I had to read it in small chunks, Hunter’s novella can easily be read in a single sitting. Due to the fast pacing and intense subject of the story, I would highly recommend setting aside a few uninterrupted hours and diving in.

I liked that Hunter left a lot of mystery, she does not spell things out. Although we know that there has been extreme flood, we don’t know more details. For example, we don’t know the range and extent of the disaster. This put me in the mindset of the narrator, as she struggles to survive with a lack of direct information. The larger scope of the disaster is really irrelevant to this particular story. The focus is on her survival, the immediate situation, and deals with the rumors and misinformation that she receives as she moves to different refugee camps. She must assess her best move on the fly, including dealing with dangers.

The ending was very interesting to me. It switches from a story of physical survival to one of emotional survival. Hunter ends the story at a precarious moment. The only thing that I was left feeling certain of, is that the narrator is a survivor and will continue to survive.

DISLIKE– I’m a bit uncertain as to whether only naming the characters by their first initial was a good move. As a reader, I sometimes found it to be confusing and distracting. I had to reread sections to remind myself of a character, which took me out of the story. From a storytelling standpoint, it creates a necessary barrier that the narrator must put up for her own survival. It also quickens the pacing.

RECOMMEND– Yes. The End We Start From is a fast-paced and emotional journey. It’s filled with danger and tension. I never quite knew where it was heading and I found the ending to be quite a surprise. I’d seek out future novels by Hunter. 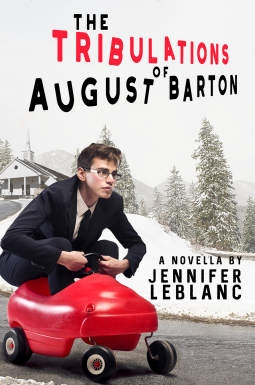 Thank you to author Jennifer LeBlanc for providing me with a copy of your novella, The Tribulations of August Barton, in exchange for an honest review.

PLOT– It’s difficult being a college freshman and it’s even more difficult if you’re August Barton. August is an anxious young man and his anxiety issues spike when things in his life spiral out of control. His parents are getting a divorce, he is completely uncool in the eyes of his dorm roommate, and his wild-child grandmother is causing problems in her nursing home. Can August handle all of these issues and learn to enjoy his first year at college?

LIKE– This story is nuts. It’s really outlandish and unexpected in the best possible way. August’s grandmother, Gertie is the polar opposite to August’s personality. Where he is shy and nervous, she embraces life and lives loud. She is not content to spend her remaining days in a nursing home, so she runs away, implicating August in her wild adventures. She brings along an old friend and fellow former prostitute, Tunes, and they work together to have a last hurrah, while making sure that August learns to live a little. They even join August at a college party, proving that age is no barrier to a good time or popularity.

The Tribulations of August Barton has a wonderful zest for life and a theme of seizing the day.

DISLIKE– Too short, way too short. The story felt crammed in, especially for the level of wackiness. I needed more time to understand and embrace the characters. The breakneck pace was too much for a novella and underserved the story.

RECOMMEND– Maybe. I loved the characters and the spirit of The Tribulations of August Barton, but I felt I was reading a solid draft, rather than a polished story. 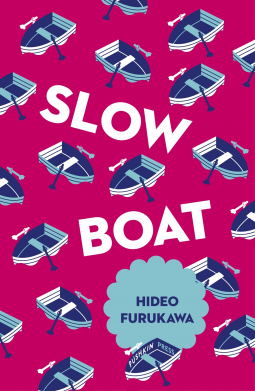 Thank you to Pushkin Press for providing me with an advance copy of Hideo Furukawa’s novella, Slow Boat, in exchange for an honest review.

PLOT– Furukawa’s novella Slow Boat is translated from the original Japanese by David Boyd. This dream-like story follows a young man named Boku and his desire to escape is native Tokyo, along with his disastrous relationships with women, who share his desire to escape.

LIKE– I read this story in a single sitting, taking me about ninety-minutes. As much as I love novels, I also enjoy reading shorter works where I can wholly immerse myself for the duration of a story, without breaks.

Furukawa’s story isn’t linear, it drifts around with regard to both content and style: for example, there are a few sections written as a newspaper article. My favorite character was a teenage sushi chef. She is bold and sassy, eventually becoming the girlfriend of Boku. Boku realizes that she will have a bigger life outside of Japan and lets her go to pursue an international internship.

DISLIKE– Furukawa mentions that he was inspired by a short story of Haruki Murakami; a story that I have not read. I feel like I may have missed the magic of Slow Boat, by not having read the Murakami story. As it stands, I was not overly impressed with Slow Boat. It was often tedious and slow. I didn’t connect with Boku, which made me resistant to care about his journey.

I’m not sure why, but throughout the novella, letters were missing, making it difficult to read. If memory serves, ” T H & F” were missing in words that contained those letters. I wasn’t sure if this was a stylist choice or perhaps because I had received an ARC. In any case, it was very distracting and served to slow down the pace in which I read Slow Boat.

RECOMMEND- No. I did not enjoy Slow Boat enough to recommend it.